The following code is meant to replicate the aesthetic of Manfred Mohr’s work, “Square Roots”. Square roots uses nothing but squares on a black background. The work itself is quite simple but can be somewhat difficult to replicate via code. Square Roots was a short film that Manfred Mohr created in 1973, in an attempt to create a computer movie. According to him it was “a painful experience at that time because an adequate technology for making films with a computer was not yet developed” and abandoned the project entirely because he felt “it was too narrative”. But, times have changed which means technology has progressed to a point where recreating something like this is simple and can be done in a short time. This is the main reason I have chosen to recreate Square Roots. To show that something that was once difficult in the past, is now easy in the present.

There are many ways to communicate with people verbally or visually. We use text, voice or even imagery to communicate a message. This can be done through online messaging, video chats, letters or even via phones. The main focus will be on the Optical Telegraph. Otherwise known as the Semaphore system. Dictionary.com defines “semaphore” as “a system of signaling, especially a system by which a special flag isheld in each hand and various positions of the arms indicate specificletters, numbers, etc.” The semaphore system was invented by Claude Chappe in 1792. The invention was quite popular all the way from the late 18th century straight to the early 19th century (Brewster 1832 pg 664 – 667).

Originally, the system used visual signals via towers with paddles. The way the paddles were positioned would signify one letter. Here’s the key for the entire alphabet with semaphore:

In France, the Semaphore system was promoted heavily by the Chappe brothers for commercial use. The main purpose was to transmit the costs of commodities. Napoleon Bonaparte was interested in the Semaphore system not because of it’s use to transmit costs of commodities but wanted it for military use. It would be used to send information between military bases. However, the idea was impractical because the military bases had to be within sight of each other. Plus, on top of this, it would require staff to be trained and disciplined operators. This made the cost of using semaphores quite expensive and made the whole idea impractical.

Here’s an image of the Semaphore network in France: 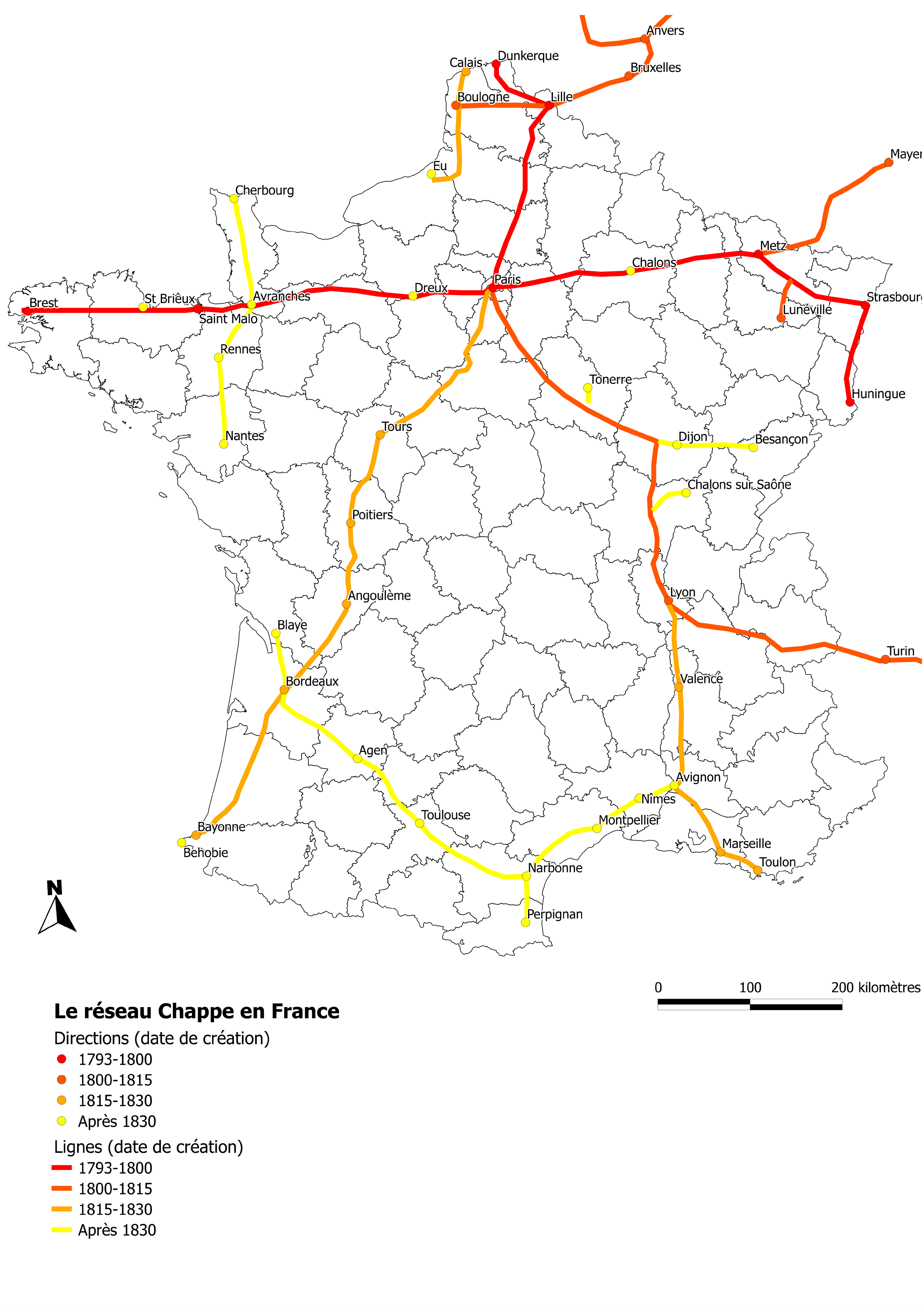 Meanwhile in Sweden, a Swedish inventor who goes by the name of Abraham Niclas Edelcrantz experimented with Chappe’s idea of the Semaphore system. In 1794, Edelcrantz inaugurated a telegraph with a poem which was dedicated to the Swedish King on his birthday. This lead to Edelcrantz’s own Semaphore system, which strangely enough, was twice as fast when compared to Chappe’s version. The system was based on ten collapsible iron shutters. The different positions of the shutters made different combinations of numbers which were then translated into letters and numbers. Eventually  there was a network of telegraphs that were about 10 kilometers a part from each other in the neighborhood of Stockholm.

The Semaphore system was so successful that Samuel Morse failed to sell the electrical telegraph to the French government; however, France finally committed to replace semaphores with electric telegraphs in 1846. Electric telegraphs are both more private and almost completely unaffected by weather; they also work at night. Many contemporaries predicted the failure of electric telegraphs because “they are so easy to cut.” (Holzmann, 2011)

While not used as often as it once was in the 19th century, the Semaphore system did lead to interesting developments such as the electrical telegraph, heliograph and semaphore flags. So it did indeed have an impact on how we communicate today.